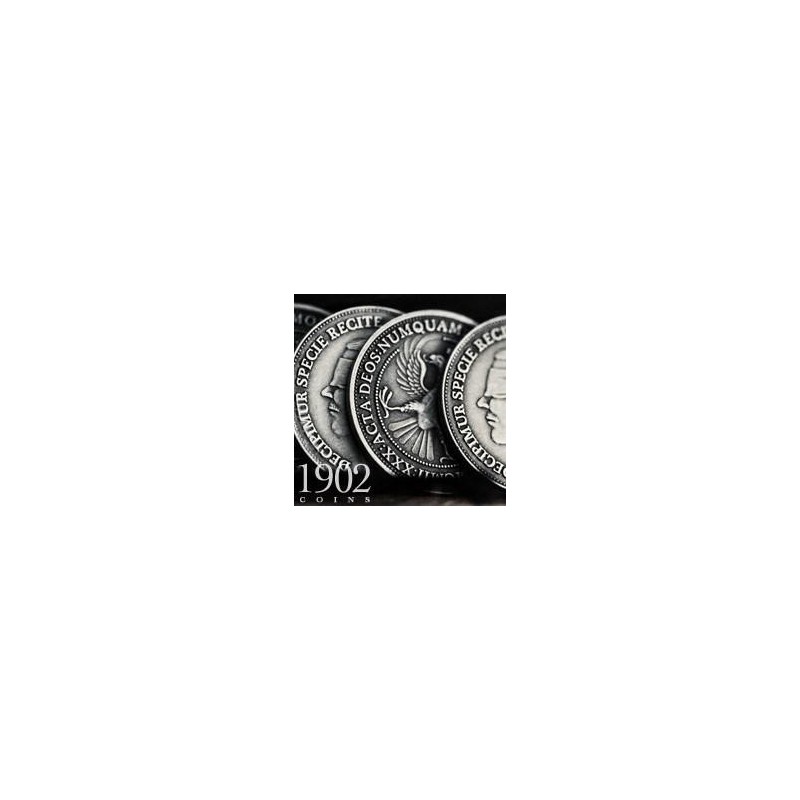 Over a year in the making, 1902 are premier antique silver finish coins with a ferromagnetic core. All the timeless looks of an aged Walking Liberty or Barber Half without the heavy Silver price tag. To build the perfect coin we looked to those that had come before. From the Roman Denarius and 16th Century Ducat, through to the Barber Half Dollar and British penny - we studied them all looking for the perfect design and the physical aspects that draw magicians to these small discs of metal. The 1902 coins feature an unmilled edge which lessens unwanted talk in the hands, but maintains the friction required for effortless palming. The softly burnished faces slide smoothly across each other and won't catch on a close-up mat when performing a coin matrix. Shaped to the exact dimensions of silver Kennedy Half-dollars, 1902 coins are a familiar handshake from a good friend. FULL OVERVIEW The coins were designed to look as if they were issued by a secret society from 1902 - perhaps one to which even Erdnase himself would have belonged. A rumoured initiation into such societies was the initiate's wearing of a blindfold to complete a challenge, representing that until one was granted access to the inner secrets, they were blind. The Double-Headed Eagle is the Babylonian symbol of the followers of Ninurta, one of the oldest secret societies in known history. In Akkadian mythology, Ninurta was the God of War, who defeated the monster Anzu to obtain the tablets of destiny - tablets that gave the bearer the power to rule the universe. 'Acta Deos Nunquam Mortalia Fallunt' inscribed along the circumference of the coin is Latin for 'Mortal Actions Never Deceived the Gods' whilst the opposite side reads 'Decipimur Species Recite A Falsis Prinicipiis' - a bastardisation of 'Deceived by the false appearance of the right principles'. FAST LIST â?¢ The exact dimensions of a Walking Liberty Half Dollar â?¢ Antique Silver Finish â?¢ Ferromagnetic Core - these coins will stick to a magnet, and can be magnetised themselves â?¢ Unmilled Edges limiting unwanted talk â?¢ Softly burnished faces allow smooth movement across a close up pad â?¢ Scratch & Impact resistant