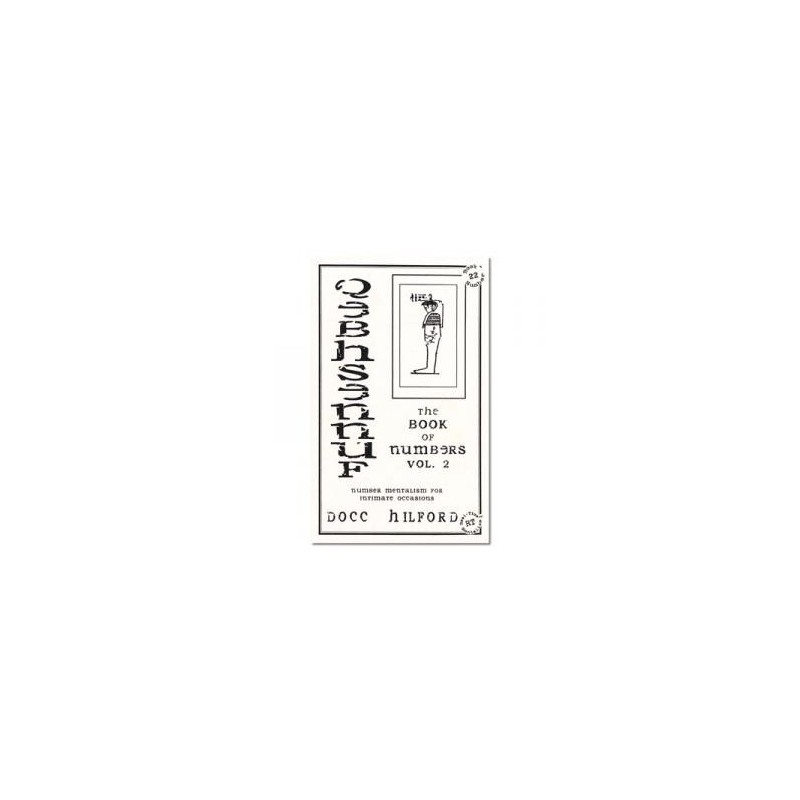 If you thought number mentalism was about arithmetic, you don't know The Book of Numbers! In this, the second volume of the three volume set, Docc reveals his original creations as well as some genuinely concealed secrets of infamous spirit mediums. Of course, these too have Docc's twists. All are designed for intimate surroundings. The tricks in this book aren't about arithmetic; they're about phone numbers, Q and A, dice and Ouija boards. This is strong, close-up mentalism. Tempest - A person writes a question on a slip of paper, folds it, and hides it under one of three inverted cups. Although the mentalist has had his back turned during this procedure, he's able to identify which cup covers the paper and to accurately answer the question! If you want to be a billet reader, this is for you. Devil Dice - The mentalist tells a tale about gambling with the devil. He puts his wallet on a table. A spectator rolls a pair of dice three times. The numbers on the dice are totaled. Inside the wallet is a written prophesy that predicts the total. There are no forces of indexes. Just one prediction is used and it's written before the spectator sees the numbers on the dice. Dicipher Bars - A set of unusual numbered bars are randomly positioned to make more and more difficult problems in addition. The mentalist is able to beat a calculator's speed in determining the total to every problem. Finally, he predicts the total of a problem yet to be seen! All of this proves an ability to see into the future! Her Number - Two women both write down a phone number of a friend and their own numbers on the back of a business card. While one holds the card, you tell them which number is which, and finally reveal one of the women's phone numbers! Libretta Minutia - A spectator puts three tiny number cards together in any manner he wishes. This creates a three-digit number that represents a random page form a miniature book. He looks at the chosen page and silently reads a word. The mentalist reveals the mentally chosen word. The charm of this trick is only surpassed by its clean method. Ouijan - A spectator thinks of a number from 1 to 10. The mentalist touches a planchette on a tiny Ouija board. The spirits move it until finally stopping on the spectator's mentally chosen number. The effects in this volume could be played together to form a complete and balanced close-up program. Busy performers are always on the watch for good close-up mentalism; here it is. Pages 40